For thousands of years we have been experiencing the nearly-fixed (see Table 1 and Chart 1), Sun-amplified, influence of Planetary Nodes.  Because of their slow movement and location within our solar system, Planetary Nodes represent the developmental process (similar to the Moon’s Nodes) of our collective consciousness as expressed by that planet and its nodal axis position; as such, they are powerful, pervasive and intense pressure to fulfill the intentions of those Planetary Nodes when a planet comes in contact with it.  While their influence is more collective-oriented, that pressure can have deep impacts individually. In Part II of this series, I’ll define the individual Planetary Nodes’ intentions and interpret the chart of the Heliocentric positions for the last 600 years (see Chart 1).  In short, we are needing to wake up and shed outworn patriarchal systems toward compassionate partnership and systems that support fundamental and sustainable existence for all beings.  In this Part I, the focus will be to illustrate and explain the Planetary Nodes location in our solar system and clarify how the Geocentric position appears to move (parallax) compared to their fixed Heliocentric locations. Both systems are effective and informative in analysis, but the Heliocentric is the most potent of them. The Geocentric positions have an energetic resonance with their Heliocentric counterparts even if they are wildly different as in the case of the Nodes of the Inner planets who cover the entire Zodiac in one year (see Table 2).

A Simplified Look at the Astronomy of Planetary Nodes

Planetary Nodes (including the Nodes of the Moon) are intersection points between the orbital planes of two planetary bodies (e.g., see Figs. 1 and 2 Heliocentric celestial spheres in yellow oval, Uranus in purple Fig. 1 and Venus in blue Fig. 2).  These points are in the orbital path of that planetary body, thereby, retaining the influence of that planetary magnified out into the solar system by the Sun. From a Heliocentric point of view, those points are stationary throughout the year(shifting slightly by 0.22-1.53º every 100 years spending thousands of years spent in each sign – see Table 1). From a Geocentric point of view, the Planetary Nodes appear to shift in different angles to the Sun – this is due to Parallax (the apparent movement resulting from our Earth-based view of the Nodes in the Sun’s plane as we orbit the Sun). Two times per year, the Geocentric Nodes of an outer planet (like Uranus – December Figure 1 upper image) are aligned with the Sun and Earth with either its South Node (SN) or North Node (NN) beyond the Earth away from the Sun – conjunct the Earth and opposed the Sun Geocentrically; the other Node is beyond the Sun ‘out of view’ of the Earth – opposed the Earth and conjunct the Sun. The biannual Sun Alignment for inner planets (like Venus – December Fig. 2 upper image) is a bit different and more complicated. Heliocentrically, either the SN or the NN is between the Earth and Sun (opposed the Sun, conjunct the Earth) while the other is beyond the Sun (conjunct the Sun, opposed the Earth). The biannual Sun Alignment for both outer and inner planets Planetary Nodes occurs every 6 months with the Heliocentric Nodes at the same sign and degrees with the Earth and Sun in opposite positions from where they were at the prior alignment 6 months before. The yellow highlighted section of Table 1gives the Geocentric Sun-alignment positions for each of the Planetary Node; those Sun-Alignment positions exactly match Heliocentric fixed positions.

What’s Up with Two Astrological Systems for Planetary Nodes?

Geocentrically, throughout the year, as Earth moves around the Sun, the APPARENT degrees between the Sun and each of the polarities of the NodesCHANGE significantly (see Tables 1 and 2). How much that change is depends the distance from the Sun of the planet whose Nodes we are looking at.  When the Nodes of OUTER planets (further out beyond Earth) SQUARE the Sun, Heliocentrically, the Nodes are at their minimum and maximum range (Table 1, bottom image of Figs. 1and 2, Fig. 3 March and September).  At the maximum-minimum square to the Sun-Earth, the outer planet Planetary Nodes switch is Node going retrograde from its maximum moving backwards in degrees towards that Node’s minimum; on the animated astrological wheel imbedded in this article, the retrograde motion of Nodes of the outer planets subtle unlike Nodes of inner planets.  Geocentrically, our perspective of those fixed Nodes varies within a range that is quite small for planets in the furthest reaches of our solar system and widening ranges as we get closer to Earth. The slow-moving planets (further out) have a very small minimum-maximum Geocentric range (Table 1 minimum-maximum difference: Pluto 3º, Neptune, 4º, Uranus, 6º).  As we move inward toward Mars through the Social Planets, the ranges get substantially larger (Saturn, 11-13º, Jupiter, 22º, Mars 79-84º, asteroids 23-54º, Chiron 7-13º). Despite the variance to the Heliocentric positions, there IS a consistent pattern and recurrence of the Geocentric positions monthly and annually (Table 2 for the 1st month positions) for both outer and inner planets.

INNER PLANETS planetary nodes geocentrically cover the entire zodiac; however, they move in a limited range from the Sun to their maximum elongation (Table 1– Venus’s Nodes never more than 45-46º from the Sun and Mercury’s Nodes stay within 18-28º of the Sun).  The movement of Planetary Nodes of fast-moving inner planets is more complex than the Nodes of outer planets. In the eastern view (lower left quadrant of the Sun on 1st Geocentric charts), either its South Node (SN) or North Node (NN) will be moving counter-clockwise but gaining in zodiacal degrees on the astrological wheel (usually clockwise movement of the Nodes and their planets); while the other is in the western view (upper left quadrant Sun on 1st Geocentric) also gaining in degrees while moving clockwise.  As that counter-moving SN or NN reaches its maximum elongation (e.g., NN-Venus – lower left of the video – January 20, Table 1), it stations for several days and then changes to a rapid clockwise motion quickly gaining in zodiacal degrees while moving towards the next Sun-Alignment.  At that conjunction, the SN and NN switch their residence in western and eastern views. For the Node in the western view, it continues it clockwise motion, increasing in zodiacal degrees, in its movement toward maximum elongation (e.g., SN-Venus – upper left of the video – April 23, Table 1) to station and change its movement to counterclockwise – but still gaining in zodiacal degrees – to head back to conjunct the Sun (for the 2nd Biannual Sun Alignment of the year).  As Earth orbits the Sun through the zodiacal wheel, looking toward the Sun where the Nodes of inner planets are bound between us and the Sun, our impression is they move with the Sun (therefore through the entire wheel – Table 2). Figure 3 gives some sense of these movements of Venus’s nodes in the six dates presented in a year that animated in the video here. Remember that Heliocentrically these inner planet Planetary Nodes are opposed all year long; geocentrically they hardly resemble their Heliocentric counterpart. It all is a matter of Earth perspective (Figs. 2 and 3).

How do you Find out How to Track Planetary Nodes?

We can refer to Table 1 for the stationary heliocentric nodes (and Table 3 for planetary node eclipses in 2019).  However, daily views of the geocentric nodes can be accessed through computer software like Solar Fire, Sirius, Intrepid, etc. Even if they are not on the ecliptic points, planetary nodal activations generally are quite potent. Keep an eye on these open portals for shifts in your personal and collective lives. For further information on the planetary nodes contact Angela Blissbridge, including booking a reading of your personal relationship with these potent portal points.

How does This Impact Me?

See Part II of this Series on the astrological meaning and evolutionary intentions they are bringing to us individually and collectively.

For further information on the Planetary Nodes contact Angela Blissbridge, including booking a reading of your personal relationship with these potent portal points.

Angela Blissbridge is an Evolutionary Astrologer, artist, and healing facilitator who strives to Connect the Dots to a Thriving You. She weaves ancient wisdom from many traditions in this life work. Her path has not been without ‘soul-detours’ of working on a Masters in Ecology and climbing the corporate ladder as a CPA in accounting. Her passion for this astrology blossomed under the tutelage of the internationally recognized master astrologer, Maurice Fernandez. Arizona is home.

Connect the Dots with Angela at:

Book and Appointment today to See how these Potent Planetary Nodes impact you! 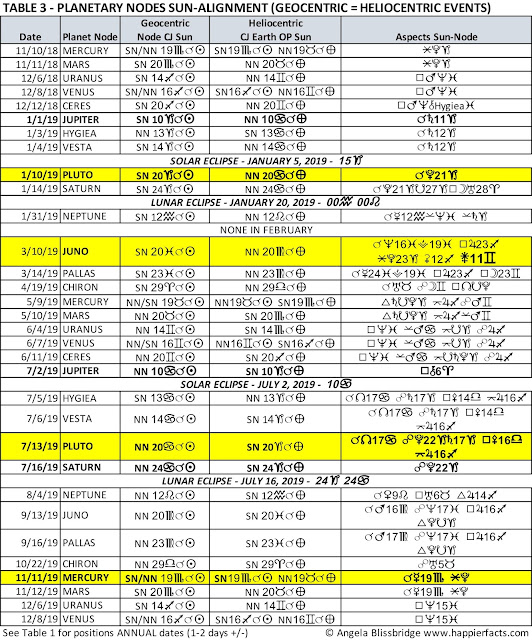 The Charts, Tables and interpretations in this article are copyright to Angela Blissbridge of Happier Facts Awakening - 2019